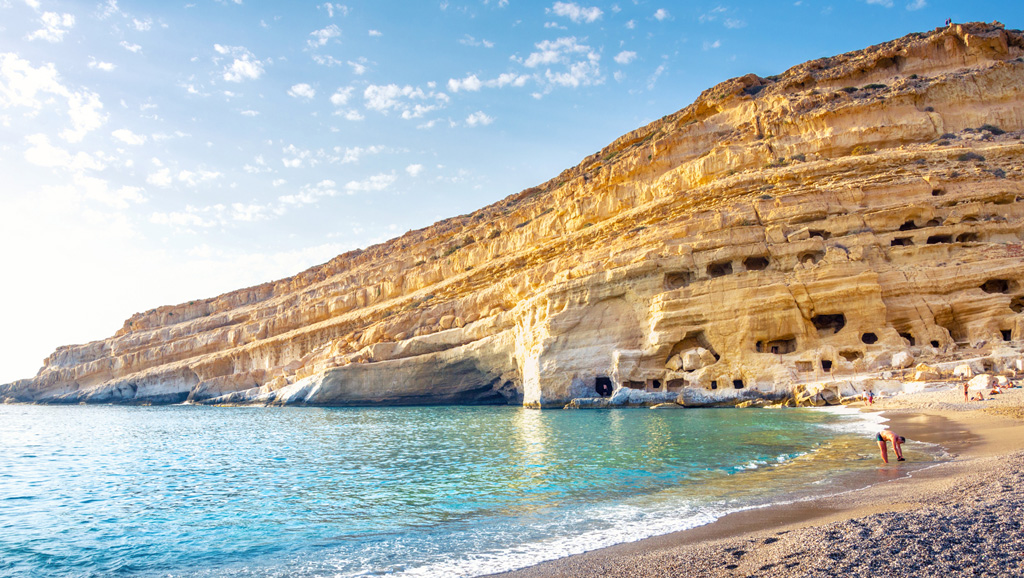 Matala is situated in southern Crete in Heraklion, about 70 km from the city. This is a small fishing village with the famous, beautiful, sandy beach. The clear, blue waters combined with the small artificial caves are carved into the rocks are the elements that make the unique beach of Matala! Matala has no infrastructure such as apartments, hotels, restaurants, bars, cafes. The beach is organized and easy access! Really worth to visit the beach of Matala! The landscape that you will see will amaze you! It is known around the world that there’s the 70 insurgents fled the new era, so-called hippies. Among the famous artists and some of the time from the scene of rock music like Bob Dylan, Janis Joplin, and Cat Stevens. Some years later, when the ”xounda” ruling Greece, by order of Bishop Gortyna, the hippies were removed from Matala. Since the caves of Matala protected by the Archaeological Service. Matala in Minoan times was the port of Phaistos and Gortyn Roman. There are many shipwrecks that have been found. The most important is that of Menelaus allegedly took place between Matala and Kommos. Throughout the region there are traces of habitation from ancient times. Inside the caves were the tombs of pre-Christian and Greco-years, while some speculate that the caves used as dwellings in prehistoric times.