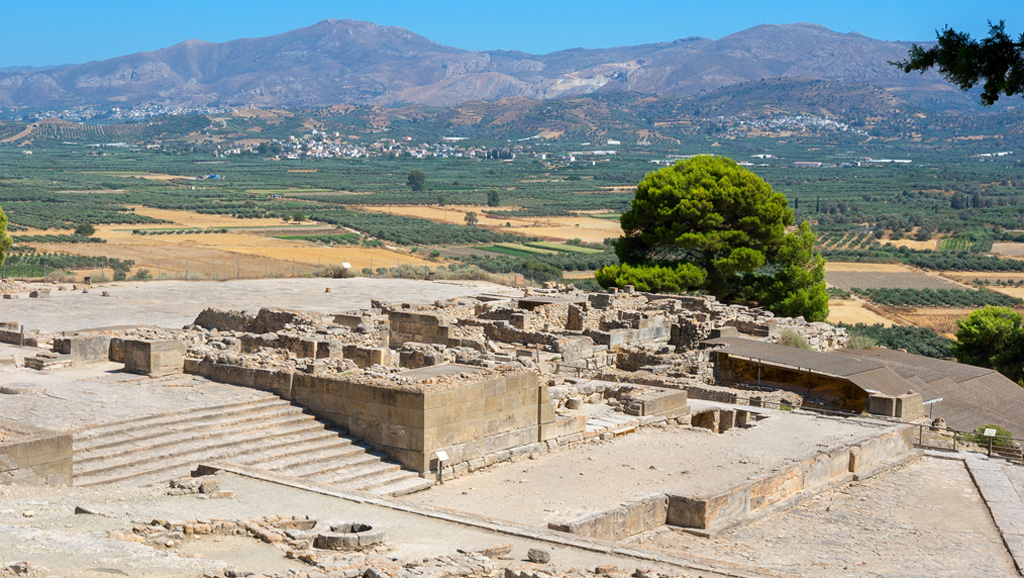 Phaistos was the second largest city of Crete in 2000 BC, after Knossos, and is now an important archaeological site. Located about 62 km southwest of Heraklion, Crete, south of the river of Geropotamos. Built on a low hill at an altitude of 100 m above sea level, surrounded by towering mountains of Psiloritis and Asterousia the Lasithiotikon mountains, while a short distance away is the town Tympaki. East and north of Phaistos is the Lithaios, where the inhabitants were supplied with water. Many authors have reported ancient Phaistos. The first mention of Phaistos is in Homer’s Iliad and Odyssey, indicating the involvement of Phaistos in the war of Troy and describes as a “well populated” city. The ancient historian Diodorus Siculus attributes the foundation of Phaistos, and Knossos and Cydonia, to Minos. Information about the history of the ancient city came to light after Italian archaeological excavations. The name is pre-Greek and signs of Knossos Linear B is Paito (attic type Phaistos) and the etymology is from F (F) = tissue brilliant, glorious. It is one of the 3 significant cities created by Minos and was the second most vital center of Minoan civilization era. According to mythology, Phaistos reign in the dynasty founded by Rodamanthys, son of Zeus and brother of Minos. Phaistos was inhabited since the Neolithic era and prospered enormously in the mid third millennium BC, the Bronze Age.The site of Phaistos is never packed and you can wanter around the encient Palace and discover the habitation in your own time go through some of the greatest remarkable sights that Crete has proposal.