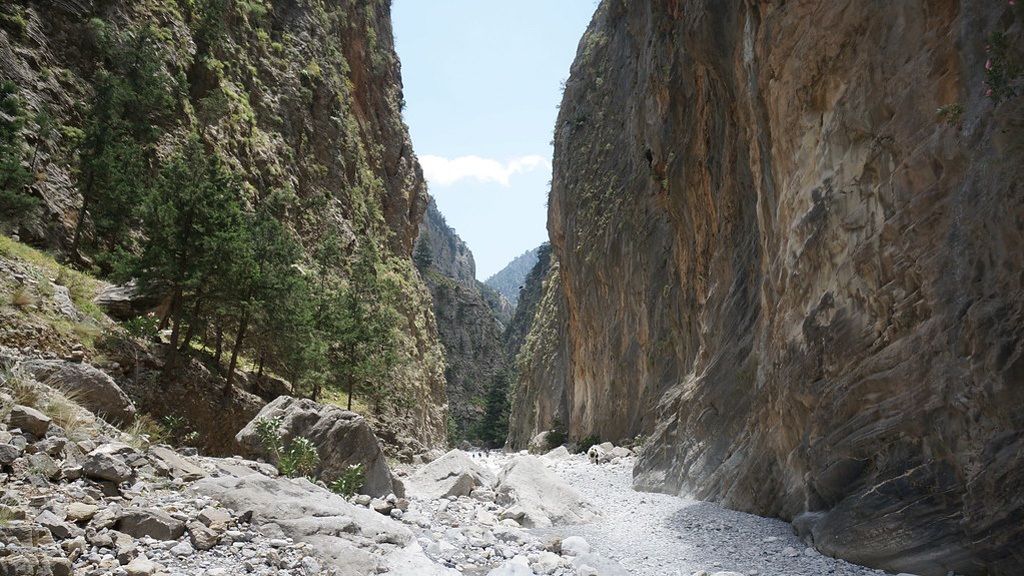 The Samaria Gorge Farranga or as the locals call it, is located 43 km south of Chania. The entrance of the gorge is situated at an altitude Xyloskalo 1227 meters. H Xyloskalo position took its name from a wooden ladder that was there again and facilitated the descent into the canyon. Also in this area (just before Xyloskalo) is a small road which leads to the ski resort in Kallergis 1680 meters in altitude. The descent of the gorge begins Xyloskalo, with steps at the beginning and then a small path. The descent is quite difficult and takes 6 to 8 hours. Those who intend to cross the gorge should wear athletic shoes and hat. Water does not need it during the journey there taps. The gorge was declared a National Park to protect the rare flora and fauna and especially the Cretan wild goat (kri – kri, as the locals call it) who lives here. Recently, Samaria was awarded by the Council of Europe as one of the most pristine and beautiful natural areas of the old continent. Sources are abundant in FarangiKonta the entrance is the chapel of St. Nicholas, surrounded by trees and water sources olodrosero. Here believed that there was an ancient temple of Apollo and a short distance of the ancient city “Kaino.” Half way is the old village of Samaria, who abandoned a few years after the proclamation of the gorge as a National Park (1962). There is the Byzantine church of Saint Mary of Egypt, where he derives the name “Samaria” which are nothing else than a corruption of: Blessed Maria – Siamaria – Samaria. Now the abandoned settlement of a telephone, a police station, pharmacy, heliport for emergency etc. Also during the journey are: first aid kits and fire extinguishers. The crossing of the gorge is a unique and compelling experience. The hiker is surrounded by nature and the wild beauty and rewarded for hard hiking in the rugged, steep land with a majestic, primitive spectacle without any human intervention. Cretan wild goat (Kri – Kri) Impressive and imposing is the point called the “Door”, because the vertical sides are too close together (3 – 4 meters). As you finish crossing the gorge seems remotely Agia Roumeli, where there the hiker will encounter one of the most beautiful beaches of southern Crete. Agia Roumeli is built on the ancient city of Tara. Cut off (by car) from the rest of Crete. Connected only by sea (small boats) to Sfakia in the east, Sougia and Paleochora in the west and from there by bus to Chania and Rethymno.